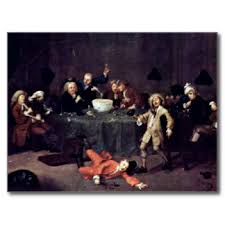 We three men from Waitrose, we are

Bringing your shopping, from afar

Delays of up to half an hour

Sauces are leaking out the box

The Ham is off and smells of socks

But you still got the blinis and masses of lox.

We know that we are top of the heap

Essentials range are yummy to eat.

We even have some sugarless beets.

Off your order, sorry to say.

Our cloves are spicy, parsnips pricey

The Oloroso won’t last the day.

What do you mean the butter won’t do?

It’s got black sea salt and cumin too

The honey has sunshine, goji and red wine

You haven’t got a chance in hell to sue.

I’ve had enough of it all today

I’ve tried my best to navigate

Your culinary leanings have no meanings

Christmas night was closing in at the Cantrips alehouse in Aberdeen, a firm favourite for riggers and other men and women who lived life close to the horizon. Sometimes, on a Saturday night, things might get a bit rowdy but Mother O’Grady would stand firm and bring out Old Jock, the pocked, brown shotgun that Mr O’ Grady, God! Rest his Soul, used to poach with up at the Big Houses littered on the path to the Cairngorms.

The fire was stacked and burning, the air fuggy with apple wood smoke and men’s dreams. Jingo and Jago, Cornish Piskie twins with not much to say, pulled pints and handed over cigarettes shivering, their odd-shaped hands blue tinged and reproachful of the cold. Straggles of louns and quines huddled in corners, whispering Auld Doric, which is unbreakable code even to Doric speakers.

Mother tolerated everything except for the usual, often getting a decent cut from the blaggers and fences, which, paid for her addiction to magical items. Upstairs, they said, she kept ‘things’ you wouldn’t ever wish to see. Poppets and hemlock wine, a summoning circle from the 15th century and Aleister Crowley’s thumb bone.

Treacle-dark whispers surrounded Mother O’Grady and she was feared and respected like no other dockside matriarch. Rumours of contracts with the devil, witchery, bigamy and bad ways with hemlock swirled about Mother like malicious wasps. Some or none were true, but she encouraged it all to keep her distance and her mystique in red velvet. The Cornish twins knew more than most being her lovers, but they barely spoke English, Piskie being their natural tongue and grew their hair long to cover elven, tri-pointed ears. They had their own secrets to keep in a world that had given up on magic and music. They preferred it here, oil people rarely became intrusive, exhausted from long stints in the cold, black North Sea where everything became confused after time. The grey, chilled blanket of dawn and dusk embracing the rigs with a damp that nipped at the lungs and found courage in man’s labored fear.

And the Piskie twins, for that’s what they were, enjoyed the comforts of Mother’s ill-gotten gains and pillowy bosom safe they thought from the Hunters’ that had pursued them through centuries of veiled land and light. They travelled through every decade or two once their patron had become too old or too much of annoyance to stay with, skirting the edge of consciousness and the fields of golden seed and bloodied plains.

This night, a night of owls and wraiths, of granite buildings that hadn’t felt compassion from the weather since the Summer of ‘79 was closing in at Cantrips. Men and a few hardy women lingered over warms slops of beer, gritting their teeth and clenching frost-nipped fists before leaving.

And so it was that only the Piskie twins and Mother O’ Grady were left in the lounge bar as midnight boomed through the night by way of St. Peter’s and it’s faithful tolling. The clean up took a gentle hour or so, serenity settled over them as they emptied ashtrays full of lung busters and cleaned tables of sticky mats and half drawn smiles.

Mother didn’t believe in Christmas but she was a hedonist and pleasure could be found in many different ways with many different people and she allowed herself a smile at the night to come.

Shea O’Grady had bowed only once in her life to a cock-sure, boy-pimp on Olivia Street. Terrance McDuffie carried a hammer and nails for all occasions, the product of a dock-wifey and a chainsaw he had no expectations other than whiskey and violence. And on Olivia Street Shea bowed to save her life and her face, begging his forgiveness on her knees, in the greasy chip paper and shattered bottles. She remembered only the expensive purple of his trousers and the vicious, animal heat that pulsed in the ice-storm.

But Christmas night is a night when promises are made good and threats made months before end in blood. A ‘sweep up’ night when evil comes to call with impunity. So when Cantrips main door flew open and the wind howled through bringing with it certain death in the guise of three tall Hunters with hack blades and maddened, ebon eyes, Mother O’Grady bowed for the second time in resignation and acceptance.

Death had been coming for so long and now here it was, fabled and brutal. Shea was sliced and salty as oyster meat, brimming with agony until the black faded and she walked the quiet road home to the cherry orchards and unconditional love of someone else’s childhood.

I am happy to announce that one of my favourite authors and all round gorgeous person, a huge talent in this commercial world, is launching (via Mariscat Press) her first  book of poetry, ‘Visiting the Animal‘.

This is going to be a blinder of an event so get yourself down to Blackwell’s, South Bridge, Edinburgh, on Thursday 3rd December 6 for 6.30.  Come along for a bit of early Christmas shopping and a glass of wine.  Music will be provided by Mike Heron (ex ISB), Andrew Greig and Friends.

Lesley Glaister in a bookshop!  What more could you want?